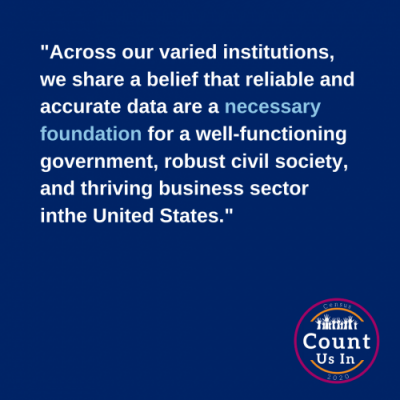 WASHINGTON — Around 450 philanthropic organizations, alarmed by the announcement that the U.S. Department of Commerce intends to “drastically cut short” 2020 census operations amid a surging coronavirus pandemic, urged the U.S. Census Bureau not to rush the significant enumeration and data processing that remain unfinished.

“Rushing the census…would hurt a diverse range of rural and urban communities, leaving them underrepresented locally and in Congress and cutting their fair share of federal funding for Medicaid, economic development, child care, schools, road and public transit improvements, home heating assistance for senior citizens, and many more vital services,” read a letter the philanthropies made public today.

The letter reflects an unprecedented consensus among national, state and local grantmakers and philanthropic institutions that have given a total of more than $100 million to help ensure an accurate census.

The Administration is planning to end door-to-door census enumeration and self response operations Septrmnrt 30, a full month earlier than it announced when it modified the 2020 census timeline as the COVID-19 pandemic took hold in the United States. The philanthropic leaders that signed the letter share the belief that the additional month is needed to complete the count; nearly four in ten households were still yet to be counted as August began.

“The bottom line is that shortening the census in the face of national public health and economic crises will result in inaccurate data, distorting the true picture of America for the next decade,” said Gary D. Bass, executive director of the Bauman Foundation and chair of a national philanthropic collaborative to promote a fair and accurate census. “An inaccurate census is not an inevitable outcome. This letter is a nonpartisan plea to the Administration to fulfill its constitutional requirement to count every person in America.”

“State and local funders have supported the 2020 census with a focus on historically undercounted communities, including people of color, low-income and immigrant families, and young children,” said Jocelyn Bissonnette, director of the Funders Census Initiative, which supports funders in their get out the count efforts. “Philanthropy has raised its voice at this critical moment because communities deserve to be fairly and accurately counted, resourced, and represented.”

The full text of the letter and list of signatories can be found at https://funderscommittee.org/resource/letter-funder-letter-to-commerce-secretary/.

Comments (0)
Thank you for your message. It will be posted after approval.