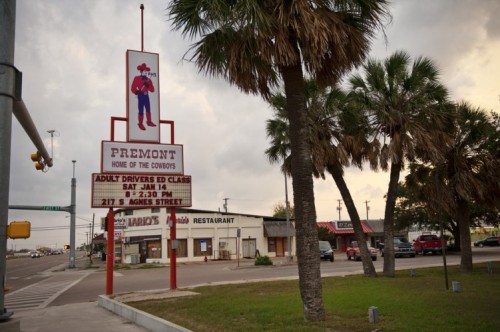 I grew up in the Coastal Bend region of Texas in a small town called Premont, about 30 miles south of Alice. Not long after graduating high school, I left town for college and I haven't lived there since. Although I've been gone for over 20 years, I still consider Premont my home. I still have a lot of family there including my father, sister, nieces and a whole bunch of primos, tías and tíos. A handful of friends I went to school with still reside there as well. The city of Premont has a great deal of needs, and since graduating with a Masters in Social Work, I've often been conflicted about living so far away and not directly giving back to my community. Growing up in Premont shaped me as a person; it influenced why I became a social worker. Working at Methodist Healthcare Ministries has helped ease that inner conflict. The work I've been doing to support regionalization efforts in the Coastal Bend will ultimately impact my hometown in a positive way.

Premont, like many rural communities in the Coastal Bend, faces many challenges associated with the Social Determinants of Health — factors beyond clinical care that impact health such as education, diet and exercise, access to care, community safety, and family and social support to name a few. If improved, these factors can help make communities healthier places to live, learn, work and play. Some of Premont's challenges include a high rate of poverty, low education attainment, limited access to health care, limited access to healthy food, and high numbers of obesity and diabetes. A good portion of what I do with Methodist Healthcare Ministries is gathering this type of public health information to help inform others of the work that we conduct in the area.

A few months ago I attended the 2016 Summer in the Park Festival hosted by the Premont P.R.I.D.E. (Premont Residents Involved in Dynamic Education) Foundation. The P.R.I.D.E. Foundation started in 2012 after the Texas Education Agency (TEA) had taken a rare action to revoke the local school district's accreditation. Premont ISD had been ordered to close down the summer of 2012. TEA decided to take this action after years of unacceptable academic ratings, complaints about rat and mold infested facilities, allegations of dysfunctional school leadership and constant budget deficits. The TEA has only shut down five schools since 1999, and in each case the decision was final, but Premont ISD leadership took advantage of an option to appeal. Knowing that losing the school district would be devastating to the community, the community worked together by raising funds and volunteering their time to repair and rebuild some of the rundown facilities. The community worked with school district leaders and developed strategies to improve attendance and test scores. The school district even cut their football program; which if you're familiar with small Texas towns is a big sacrifice. The community worked to form a partnership between Premont ISD and Texas A&M University-Kingsville to improve academics. All this work resulted in the school district receiving a reprieve from the TEA. The P.R.I.D.E. Foundation was formed as a result of the community's struggle to organize and garner support to save the school district, and in turn became an ongoing advocate for dynamic and quality education for the children of Premont.

Summer in the Park is the P.R.I.D.E. Foundation's big annual fundraiser. This year, Methodist Healthcare Ministries proudly sponsored the event in part. Initially, it started out as a call out to all Premont ISD alumni to come support the community during the TEA crisis. Now it's grown into a full-fledged community festival with food, music, games, a 5K run/walk, and a 3-on-3 basketball tournament. Proceeds go toward the school district. Organizers of the festival pride themselves in saying that the event serves as a symbol of community. They feel it serves as a way for Premont's children to form strong associations with what it is like to live in a small town with limited resources, and that sometimes in order to make a difference, you have to sacrifice your personal needs for what is best for everyone else.

I attended this year's Summer in the Park event with my father and had a great time. It was unseasonably cool for late June so the turnout was excellent. While reconnecting with friends and family, I was asked numerous times about where I live and where I work. When I told folks I worked for a not-for-profit in the health care industry, the conversation naturally steered toward health. Nearly everyone I spoke to recounted their struggles with diabetes, obesity, high blood pressure, the cost of medicine, and not being able to see a doctor because there isn't one nearby (which is one of my 76-year-old father's primary complaints, along with being too old to sit and wait all day to see a doctor). "Why go?" he often says jokingly, but I know it is a source of frustration for him and many others in the community. In order for my dad to see a primary care doctor, he has to travel more than 30 miles to Alice or Kingsville. Often times he gets to his appointment on time, but still ends up sitting in a packed waiting room for hours and is sometimes asked to come back another day. His only other options are to use one of the local emergency rooms or travel another 40 miles or so to Corpus Christi to see a primary care doctor. Even though my dad is fully insured with Medicare and has transportation, seeing a doctor is hard work.

Unfortunately, I think there's a misconception that small towns are filled with people who don't care about their own health, and that the community is the reason the county ranks so poorly when it comes to health outcomes. I think this interpretation is flawed and ultimately detrimental to the health of communities like Premont. While visiting Premont I witnessed a community that is vibrant, strong, and prideful in their ties with one another. I saw individuals eager to learn better ways to manage their health but overburdened by the huge hurdles they need to cross just to see a primary care physician or get their medicine.

There is evidence that small communities like Premont indicate a strong awareness about health. Evidence like the 5K run/walk that was added to Summer in the Park after its second year. The event was proposed by a few community members who had made personal commitments to live healthier lifestyles. This year, more than 50 people participated in the 5K, with an 11-year-old as the youngest participant and an 82-year-old as the oldest. Evidence like the 3-on-3 basketball tournament that has taken place since the first festival. Participants practiced for weeks at their homes and at the local community gymnasium. Children and adults for generations have packed the "old gym," a 1950s era gymnasium owned by the city, to be active and play. My mother taught my brother and me how to shoot free throws at that gym.

A community that bands together to save their school district from what the TEA even thought was a lost cause, is a community that is resilient and cares about its overall well-being. If we look closely, outside of the numbers and metrics, I think we can find a great deal of passion and community commitment for health care in rural communities. As Methodist Healthcare Ministries moves forward with regionalization efforts, I believe rural communities like Premont can be impacted in a profoundly positive way. When communities are given the opportunity and resources to build on their strengths, change can happen for the better. As Methodist Healthcare Ministries connects with local leaders and listens to community needs, not only will health be impacted, but people's perceptions of what is possible will too.