“Congratulations, you have diabetes” – how Marco overcame Type 2 diabetes

“Congratulations, you have diabetes! ” … Those were the words my childhood friend, Marco, remembers being told by his physician when he was diagnosed with Type 2 diabetes in 2010. He was only 35 years old. By the time Marco was officially diagnosed with diabetes, his doctor concluded he had been suffering from a developed case for several years. Marco estimates he was feeling symptoms related to Type 2 diabetes for about four years before seeing a doctor; symptoms like chronic fatigue, having a hard time staying awake after meals, major changes in vision, neuropathy, blurred vision, frequent urination, intense cravings for sugary foods and constant hunger. He even noticed a dark patch of skin forming around his neck. The medical name for this is Acanthosis Nigricans and it is often a sign of a serious health problem, like Type 2 diabetes. Marco had also gained a significant amount of weight. 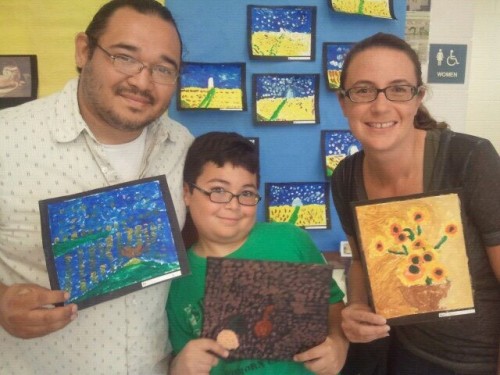 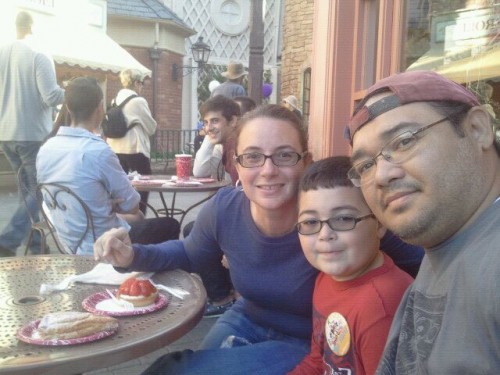 Marco and I grew up together. When we were in high school, Marco was a 5’6” powerhouse hovering at about 180 lbs. He was fast, lean, and could bench press nearly 300 lbs. He played fullback on the football team; when he carried the ball, he was like a red flash running by. You felt sorry for anyone who got in his way because when Marco put his shoulder into you, it felt like getting hit by a wrecking ball. Marco was the kind of athlete that didn’t only work hard when he was carrying the ball, he was that guy coaches all encouraged us to be — the guy that would give 100 percent every single play from whistle to whistle and still take the time to motivate and encourage the rest of the team.

By 2010, years after graduating high school, Marco gained over 60 lbs. When I asked him why he never went to the doctor — even though he was having symptoms related to Type 2 diabetes — he said he had intended to go, but during that time life was just too busy. He and his wife, Jenny, were both embarking on opening small businesses, buying a house and raising a young child. Along with these life stressors, Marco didn’t have health insurance. It was too expensive — many of us can relate to this experience, I know I can. Unfortunately, there were major consequences for not having seen a doctor at the first sign of symptoms, and by the time he was diagnosed with Type 2 diabetes, Marco was already very sick.

So, what was the last straw for Marco? What finally sent him to the doctor? He suddenly couldn’t see! He was suffering from diabetic retinopathy. His on-and-off blurred vision had progressed, and while driving home from work one day, his vision went blurry and stayed that way. Marco said it truly scared him; that day he sat at home terrified because he didn’t know what was happening to him. The following day he went to see a doctor, and the doctor suspected it was retinopathy due to diabetes. He had to have emergency surgery to correct his vision.

On the day Marco was officially diagnosed, his blood sugar was sky high — the glucometer read 530! When his blood work came back confirming he was diabetic, his doctor said to him, “Congratulations, you have diabetes.” Marco was given a prescription and was sent on his way. This all took place before the Affordable Care Act was established, so since Marco now had a preexisting condition, the monthly premium to insure him was tremendously high. Despite his diagnosis, Marco still couldn’t get health insurance. Besides being handed a script for his medication, Marco was not offered any health education or nutrition information. Marco knew he needed to cut out sugar and watch what he ate, so his blood sugar wouldn’t get so high. Other than that, he wasn’t sure what else he should do.

Nearly a year after taking prescribed medication and dieting, Marco’s blood sugar was still out of control so his doctor added insulin to his treatment. That was the proverbial straw — Marco had had enough. He couldn’t imagine managing the rest of his life that way. He was taking a bunch of medicine, trying to eat right, spending a lot of money on prescriptions and doctors, and he still wasn’t feeling any better, so he was resolved to make a change.

Sometime in 2011, Marco started walking every day. He walked 2 miles nearly every day for six months. He lost a few pounds and noticed his blood sugar was getting a bit easier to control. Then, he dusted off the bicycle in his garage and braved the blistering Valley heat. He cycled to and from work, a 10-mile round trip. Marco also cut nearly all sugar from his diet and stopped drinking sodas and beer. He primarily ate chicken, fish and vegetables. He would add some grains on occasion but mainly kept to a diet consisting of meat and greens. His dedication paid off and his doctor told him he could stop taking insulin, but he had to continue taking his other prescribed medication. By this time, Marco’s family and friends were noticing a change in him. He was dropping weight and was a lot less temperamental. Marco said he stayed motivated because his wife, Jenny, and his son, Ethan, were super supportive and they too adopted his more active lifestyle. Marco carried around his lab results and showed them to friends and family to show them how well he was doing; receiving praise from his family, friends, and even his surprised doctors motivated him. Yet, despite his great success, Marco was still frustrated by having to take prescribed diabetes medication, but he figured it was something he was going to have to accept.

To add variety to his exercise routine, Marco joined a gym in 2014 with an old friend —  a competitive powerlifter. Marco began waking up at 5 a.m., five times a week, to go lift weights before heading to work. Marco loved getting back into weightlifting. He worked out daily with competitive weightlifters and pushed himself to new limits. After working out for several months, his workout buddies encouraged him to sign up for competitions. Now he competes regularly as a competitive powerlifter regularly sends me text messages with updates on how much he benches, its inspiring. He recently let me know that he had bench pressed 300 lbs. — twice! It’s amazing considering Marco is 42 years old, 5’6,” and now keeps his weight between 210 and 220 lbs. Even more impressive than his bench press, is the fact that Marco no longer takes any medications to manage his blood sugar. Since 2014, Marco has not taken a single pill or had to endure a single injection to manage his diabetes. It took him four years of incremental lifestyle changes and hard work to get well, and he managed to do that without health insurance and minimal support from his doctors. With his improved health, Marco finally was able to afford health insurance in 2014 when the Affordable Care Act came into play. His pre-existing condition was no longer a factor in the cost of coverage, so he was able to take advantage of a plan.

Marco’s story is about as rare as a unicorn, but there are aspects of his experience that are important and need to be examined closely by policymakers. Relative to what it costs to treat an individual with diabetes on a yearly basis, the interventions Marco used to get well were relatively cheap. According to research published in 2013 by the American Diabetes Association, people with diabetes have health care expenditures 2.3 times higher than individuals without diabetes — $13,741 versus $5,853 per year. So, if you have diabetes, your yearly health care expenditures are nearly $8,000 more per year.

If you think about Marco’s story, it wasn’t medication that made him better, nor did he undergo some special medical procedure to get well. Instead, it was incremental lifestyle changes that made the difference. He focused on diet and exercise. If you ask Marco, he’ll tell you the first year after being diagnosed, he focused primarily on diet, but he did not see significant improvements in his blood sugar readings until he began exercising. He saw the biggest improvement in his blood sugar regulation after he added weightlifting to his exercise routine. He feels it was the weightlifting that ultimately helped him cross the bridge to no longer needing any medication.

Another major factor in Marco’s recovery was the support he had from his family. It is important to mention that Jenny and Ethan supported Marco by trying to eat the same things he ate and avoiding keeping sugary foods and drinks in their home. Initially, this was challenging, but over the years they said it has gotten easier.

I wonder if Marco would have focused on his health immediately after his diagnosis, had his doctor written him prescriptions for the things he actually needed: family support, health education, walking shoes, a bicycle and a gym membership. If that’s the remedy for successfully battling diabetes, why are we and our health care system primarily focused on medication and doctor’s visits? Wouldn’t it be great if your insurance plan covered the things you need to make healthy lifestyle changes? Our health care system and policymakers must work together to provide communities with safe, affordable, and accessible places for people to exercise.

It’s also important to note, Marco was really sick when he found out he had diabetes and he hadn’t been to a doctor in years. Imagine if Marco would have had access to affordable health insurance and would have taken advantage of preventive health screenings. His diabetes progression could have potentially been avoided. If we really want to put a dent in successfully reducing the number of individuals with diabetes, there needs to be a focus on prevention.

Since 2014, Methodist Healthcare Ministries has been working with Rio Grande Valley stakeholders in a collective impact initiative called Unidos Contra la Diabetes (UCD). By working collectively, health care providers in the region are working to align their efforts and place more focus on diabetes prevention, not just treatment. There is still a lot of work to be done, but efforts like UCD are important. Even more important, I believe, are stories like Marco’s that elicit hope, because too many people and health care providers in these high-diabetic communities are feeling hopeless. You rarely hear about the success stories, so here is one of them. 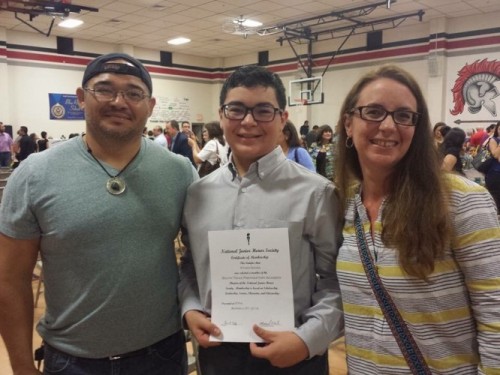 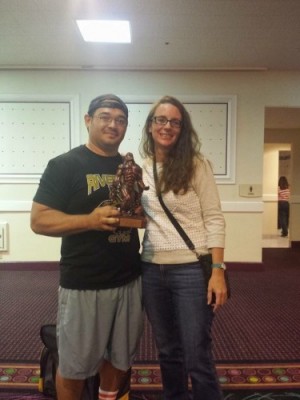 Comments 1 - 3 (3)
Thank you for your message. It will be posted after approval.
Sonia Gonzalez
So proud of you Marco! I, as well am fighting diabetes. It can be done. Such a truly inspiring story. Well written Abel! Proud to call you both my classmates!
Deborah Siemonsma
I never knew this about Marco. He is a talented artist and a wonderful young man. Kudos to him.

Brit Peek
What a beautiful story of resilience and dedication to his health. I am so proud of Marco! T

“Congratulations, you have diabetes” – how Marco overcame Type 2 diabetes