During the 85th legislative period, Methodist Healthcare Ministries tracked roughly 1,400 bills, supported over 500 bills, and worked to assist the passage of 224 laws that affect access to health care for Texas families. Keep up to date on how those laws are being effectively implemented and funded as intended through our legislative updates.

Children’s Health Insurance Program (CHIP) reauthorized for six years
Families in the Children’s Health Insurance Program breathed a sigh of relief after Congress voted to end the government shutdown and extend CHIP for six years. The decision secures health care coverage for more than 400,000 children in Texas. Funding for the program had originally expired at the end of September 2017, forcing states to rely on reserve funds to keep the program going until December when Congress moved to approve an additional $3 billion for CHIP. This would have carried states through March to maintain coverage for an estimated 9 million children. The Valley Morning Star reports that the Congressional Budget Office estimated a 10-year extension of CHIP would decrease the federal deficit by $6 billion, as it would be more expensive for the government to pay for health coverage through Medicaid or subsidies on the health care marketplace. According to National Public Radio, some advocates worry that the months of uncertainty around CHIP may have already caused children to drop out of the program, thus increasing the uninsured rate among children. View Texas CHIP enrollment data by county.

Methodist Healthcare Ministries releases bill summaries for 'Access to Care' legislation
During the 85th Legislative Session, Methodist Healthcare Ministries tracked over 1,400 health care bills, of which 220 were signed into law. View summaries for 48 bills impacting access to care for Texas’ working families. Summaries of bills related to health care workforce, behavioral health, and women and children’s health will be made available in the next few weeks.

Federal administration announces work requirements for state Medicaid recipients
On Jan. 11, the federal administration announced that states can now apply to add work requirements to their Medicaid programs. Ten states have already applied, but Texas isn’t one of them. The Dallas Morning News reports that requiring its Medicaid recipients to work wouldn’t have much of an impact because Texas didn’t expand its program to include more people under the Affordable Care Act. Out of roughly 4 million Medicaid recipients in Texas, there are only about 150,000 impoverished adults covered by Medicaid who aren’t pregnant, elderly or disabled, according to the San Antonio Express-News. State Senator Charles Schwertner, who chairs the chamber’s Health and Human Services Committee, states that the federal policy change gives states more control over their own Medicaid programs. On the contrary, State Senator Carlos Uresti, vice chair of the committee, said the Legislature should further study the issue before making any decisions that could unnecessarily drive families and children further into poverty.

Methodist Healthcare Ministries’ coalition partners aid in enrollment outreach
Enrollment for health insurance under the Affordable Care Act soared in the final days before the federal sign-up deadline, bringing 2017's total within a few percentage points of the total number in 2016, when the enrollment period was twice as long. With the help of Cover Texas Now, 1.1 million Texans signed up for health insurance for 2018, according to Public News Service. Nationally, total enrollment in 2017 topped 8.8 million people, 4 percent below the 2016 total of 9.2 million, even while battling confusion among many potential enrollees regarding the fate of the law. More than 4.1 million people signed up in the final week alone.  Despite enrollment numbers, Texas will likely continue to have the highest rate of uninsured people in the country in 2018, according to the Austin American Statesman. People needing marketplace coverage will continue to face uncertainty, as some members of Congress continue their efforts to repeal the Affordable Care Act.

Although HB 10 took effect September 1, 2017, the implementation process is ongoing. The legislation addresses parity from four different angles: regulation, data collection, collaboration, and consumer assistance. These different pieces are moving ahead in different stages. Mental health parity laws hold a great promise in helping Texans access needed health care to achieve recovery, but that promise of parity has not been fully realized. HB 10 helps to address ongoing challenges with oversight, data collection, cross-agency collaboration, and consumer assistance. All of these pieces will help ensure that more Texans have equal access to mental health, as well as other health care services through their health plans.

The Hogg Foundation created a fact sheet with information on how parity works and what you can do if you believe you or a loved one has experienced a parity violation. Methodist Healthcare Ministries’ advocacy partner, Center for Public Policy Priorities, released a brief on mental health parity history and implementation.

Methodist Healthcare Ministries supports state and local efforts to increase tobacco age to 21
During this past legislative session, the House Committee on Public Health considered House Bill 1908, by Representative John Zerwas, to raise the minimum tobacco age in Texas from 18 to 21. The bill was approved by the committee but did not make it to the House floor for a vote. On Jan. 11, after two hours of deliberation and testimony from more than 30 people, the San Antonio City Council approved a new law prohibiting merchants in the city limits from selling tobacco products to anyone under 21 years old, reported by the San Antonio Express-News. San Antonio is the first city in Texas to enact such a law. The new ordinance, which city officials discussed since August, passed by a 9 to 2 vote. The “Tobacco 21” ordinance will take effect Oct. 1, 2018, allowing the San Antonio Metropolitan Health District more time to implement provisions and gather input from surrounding cities.

The city of San Antonio will work to educate the public and retailers about the new law. New signage will be placed in stores, and if a retailer is suspected of selling tobacco products to someone under the age of 21, the city’s health department may check compliance. If a retailer is caught violating the law, a citation with a maximum fine of $500 will be issued.

As reported in the San Antonio Current, according to Colleen Bridger, director of San Antonio Metro Health, 95% of smokers begin before the age of 21, during a period of time when the brain is especially susceptible to addiction. An online survey of more than 5,000 San Antonians showed that 77.5% of participants supported the age hike. Supporters included physicians, cancer survivors, health insurance companies, the San Antonio Chamber of Commerce, high school students and teen ambassadors. Several opposed the changes including convenience store owners and the Association of Convenience Store Retailers in San Antonio due to lack of input from merchants and potential financial consequences. KXAN reports that ordinances like Tobacco 21 are critical to reduce and eventually eliminate tobacco’s toll, especially considering that nationally about 95% of adult smokers started before they turned 21.

January 31: Medicaid Waivers: Work Requirements and Beyond
Join Families USA for a free presentation on how state advocates can address Medicaid waiver proposals that include work requirements and other restrictions. Experts will review recent HHS approvals of work requirements for Medicaid, and the tools available, for state advocates to address similar proposals. The webinar will start at 1 p.m. CST. Register now.

April 16-18: The Texas Campaign to Prevent Teen Pregnancy’s 7th Annual Symposium
Texas Campaign to Prevent Teen Pregnancy’s Annual Symposium will bring together professionals from across the state to participate in panel discussions, presentations and professional development workshops. The event will focus on creating change and improving adolescent health in Texas. Register by January 31 for a discounted rate. Register now.

Maternal Mortality in Texas
It’s impossible to solve Texas’ maternal mortality problem with faulty state data (Dallas News)
Texas has a problem: Deaths of women linked to pregnancy and childbirth are increasing. How bad is the problem? We don’t know. That’s another problem. A new study in the medical journal, Birth, suggests that the reporting and data collection system in Texas is inaccurate, making it impossible to develop a clear picture of how many women are dying of childbirth-related complications. Read more.

Medicaid work requirements make no sense for Texas - or other states. 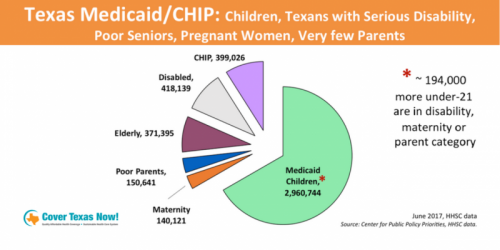 Comments (0)
Thank you for your message. It will be posted after approval.