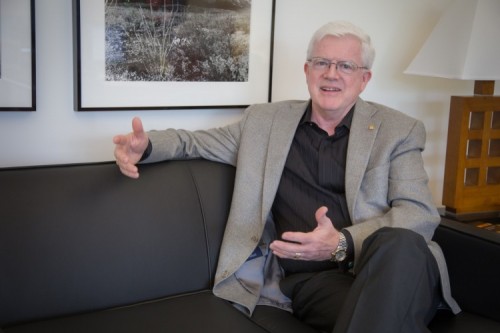 For 21 years, Kevin C. Moriarty has served as the president and chief executive officer of Methodist Healthcare Ministries of South Texas, Inc. But today, Moriarty announced his plans to retire marking the end of an extraordinary career of faithful service to South Texas. Moriarty will continue to serve as CEO until a successor is named and successfully on-boarded. The Methodist Healthcare Ministries' board of directors will engage an executive search firm to evaluate candidates for CEO.

"Kevin's service and commitment to the patients, clients and communities we serve across South Texas over these many years have been steadfast and he has been the fiercest of advocates for the least served, an innovator, and an exemplary model of servant leadership for the MHM team of talent he has led during his tenure," said George Ricks, the chair of the Methodist Healthcare Ministries board of directors. "I know I speak for everyone on the board of directors when I say that we at Methodist Healthcare Ministries deeply respect and admire Kevin for his passion, tenacity and bold leadership."

In his role as President and CEO, Moriarty is responsible for advancing the dual objectives of Methodist Healthcare Ministries' mission: To improve the health of the least served in The United Methodist Church's Rio Texas Conference area and oversight of the quality and charitable activities of the Methodist Healthcare System. Accordingly, Moriarty has been primarily responsible for the executive administration of the primary care medical and dental clinics owned and operated by Methodist Healthcare Ministries, sustaining the grants portfolio, and setting the research, advocacy and policy direction for the organization.

"As a father of five children, I have been driven to provide for all our communities the same levels of care that I would require for my family. Accepting this job 21 years ago has been one of the greatest adventures of my life," expressed Moriarty. "I arrived in San Antonio over 40 years ago as a very young man from New York with hope that I would find a career that was both meaningful to me and gave me an opportunity to make a positive difference in peoples' lives. I was lucky to do it first as a public official with the City of San Antonio for over 20 years, but incredibly blessed to do it again as CEO of Methodist Healthcare Ministries for over 21 years. To have done all this in the community where I have raised my family and proud to call home is something for which I am very grateful!"

Through the partnership with HCA, Moriarty grew Methodist Healthcare Ministries' strategies for community health from a budget of $3 million for 2,900 clients in 1996, to a budgeted expenditure of $105 million in 2017 through contracts with partners and operated programs impacting 300,000 patients per year in 2017.

Methodist Healthcare Ministries has also played a pivotal role in the development of state policies under Moriarty's leadership that have helped countless low-income families and the uninsured across the state access care. Under his direction and through his advocacy, the organization played a pivotal role in the development of the Children's Health Insurance Plan (CHIP) and the Texas Women's Health Program. In Bexar County, Moriarty led and supported local efforts to fluoridate the water supply in San Antonio, develop the Women Involved in Nurturing, Giving and Sharing Program—also known as WINGS, the Health Collaborative and Health Access San Antonio or HASA, and managed Methodist Healthcare Ministries' $7.1 million gift to fund construction of Haven for Hope's medical, dental, vision and intake facility in 2008. Outside of Bexar County, Moriarty was vital to the collaboration that established the only Federally Qualified Health Center in the Coastal Bend at the time and which remains a critical source of care for that region's uninsured population. He also created funding relationships through the FQHC network in San Antonio and throughout the 74 counties of the Rio Texas Conference of The United Methodist Church with 17 FQHC's.

"What has motivated me and fills my heart with joy was to try as best I could to live up to what John Wesley, the founder of Methodism, asked of all who follow in this faith tradition: That I did all the good I could do, in all the places I was able, and for as many people as I could," said Moriarty. "There is more to do, and I am confident this organization is prepared for what lies ahead, just as I am ready for the next adventure in my story to begin. This is the legacy I leave for the next generation of leadership at Methodist Healthcare Ministries."

Upon his retirement, Moriarty will remain actively engaged in the community. "I look forward to sharing my gifts and talents in new ventures and relationships, creating pathways forward, for San Antonio and Texas."