Since the first Europeans set foot in the Americas, racism has been a defining factor in the health and well-being of people inhabiting this land. As long as some people continue to benefit from a conscious or subconscious belief that they are superior to others because of their race, racism will continue to benefit some groups and disadvantage others. Despite significant progress toward civil rights, research consistently identifies significant racial health disparities in the United States, including life expectancy, diabetes, and depression.

Practical recommendation 1: Be aware of your own implicit bias – take a quick implicit association test from Harvard University (click “Go” to enter Project Implicit Social Attitudes as a guest, and after reading/agreeing to the preliminary information, select “Race IAT”)

In respect to healthcare services, one of the ways in which racism continues to contribute to health disparities is through the implicit bias of providers. This includes both the courses of treatment that are recommended (for example, the likelihood of receiving a limb amputation for peripheral arterial disease: African-American patients are 77% more likely to have the limb amputated compared to White patients) as well as how those recommendations are communicated. Lower levels of patient trust and perceptions that care is not patient-centered are both tied to lower levels of patient adherence and ultimately, poorer health.

Specific to South Texas, a recent study in the Rio Grande Valley found significantly higher rates of children with post-traumatic stress disorder (PTSD) regardless of immigration status – almost 1 in 5, compared to 1 in 20 in the US – raising questions about implicit bias along the border and its impact on child and family health.

Practical recommendation 2: When feeling stressed, slow down and become aware of yourself (practice mindfulness) – we are more likely to communicate poorly and erode trust with patients when we are rushed and not balanced

There is a growing body of research into the ways in which experiences of racial discrimination are linked to decreased mental health, lowered life expectancy, and increased likelihood to smoke or use drugs. Not surprisingly, research also shows that Latinx and African-American individuals are more likely to experience adverse childhood experiences, which are also clearly tied to poorer health outcomes. As illustrated by the “Pair of Aces” image below, many adverse childhood experiences are rooted in adverse community environments, which include poor housing quality, lack of social mobility, and poverty. 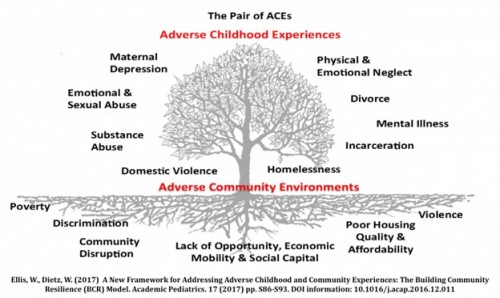 In truth, many health disparities are intersectional, meaning that those who are disadvantaged tend to be impacted by more than one form of social inequity. To attain equity, the health impacts of gender, classism, and material poverty must be addressed in addition to racism.

Practical recommendation 3: Use a mapping tool to learn about your community’s health disparities; for example, check out PolicyMap.

Focusing on income, research reveals clear disparities: a consistent gradient of decreasing health status for adults with lower income levels along a variety of indicators, including life expectancy, coronary heart disease, and limited activity due to chronic disease. Individuals with lower levels of income are less likely to have a college degree or attend graduate school, and research shows a clear gradient of decreasing health status for lower levels of education indicated through infant mortality, self-reported health status, and obesity. Furthermore, economically disadvantaged individuals are more likely to be inactive and less likely to use leisure time for physical activity, which has been linked to lower perceptions of control over time and safety.

As you examine data about your patients and the larger community, what does the data reveal about health disparities? How do those revelations inform your work? In our next post, we turn to strategies to support our efforts to build greater health equity.

Tim Barr is the Collective Impact Strategy Manager for Methodist Healthcare Ministries. He supports, develops, and facilitates collaborative efforts in South Texas. Tim is also a member of the Climate Equity workgroup for the City of San Antonio’s Climate Action and Adaptation Plan.

To see part 1 of this blog series, click here.

To see part 3 of this blog series, click here.