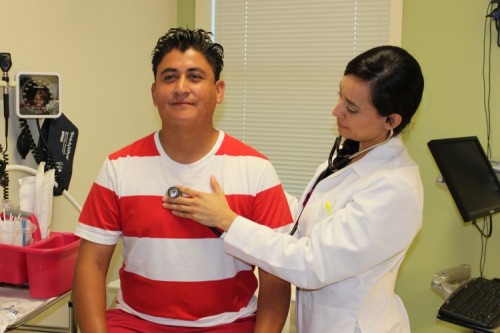 Significant health differences for Blacks and Hispanics in Texas lead to higher health care spending, lost work productivity and a dramatic number of years lost to premature death. That's just a few of the findings of a new study examining the economic burden associated with health disparities across the state. Episcopal Health Foundation and Methodist Healthcare Ministries of South Texas, Inc. sponsored the report.

The report found people of color in Texas are less likely to say they're in good health, more likely to be uninsured, and have higher rates of diabetes and obesity. The report found these and other poor health outcomes cost families, employers, insurers and governments an estimated $1.7 billion in excess medical spending for hospital care, doctor services and prescription drugs. Researchers estimate health disparities cost Texans $2.9 billion in lost work productivity, primarily because of costs associated with more annual hours off work due to poorer health. The report also found poor health outcomes lead to a dramatic number of years lost to premature death - nearly 400,000 lost life years in Texas today, split evenly between Blacks and Hispanics. This loss of life represents an economic impact of nearly $20 billion, the report found.

"The average Hispanic or Black child in Texas is much more likely to be born into a reinforcing cycle of poorer health, lower educational attainment and fewer job opportunities," said Elena Marks, president and CEO of the Episcopal Health Foundation which co-sponsored the report. "These preventable differences not only unnecessarily lead to more illness and disability for many Texans, but the entire state is paying a massive economic cost. And if nothing changes, those costs will rise dramatically."

The report found that the economic impact of health and socioeconomic differences are expected to increase as Texas' population grows and people of color become of larger share. Two-thirds of the 7 million children in Texas today are children of color, and half are Hispanic.

"Disparities in health status are already higher in Texas than in many states, and it's an issue that will increase in importance given the changing composition of the Texas population," said Ani Turner, co-author of the report and co-director of Altarum Institute's Center for Sustainable Health Spending.

Turner and other researchers estimate by 2050, the economic costs of health disparities in Texas are expected to increase by more than 80 percent to $3 billion in excess medical spending, $5.5 billion in lost productivity and 690,000 lost life years at a value of $35 billion.

"We can't sit by and allow the cycle of health differences to continue," said Kevin C. Moriarty, president and CEO of Methodist Healthcare Ministries. "Given the enormous economic burden of these health differences in Texas, we have to make the health of ALL communities and access to care for ALL a priority in our state."

Moriarty and Marks said expanding Medicaid would ensure that uninsured, low-income Texans would gain access to needed health insurance to access care, and ultimately have better health outcomes. The two philanthropic leaders believe the report should help guide elected officials, communities, and congregations in developing policy and budget priorities to reduce the human toll and rising costs of health disparities in Texas. The report was co-authored by Ani Turner and Erica Munoz-Rumsey of Altarum Institute, Thomas LaVeist of George Washington University, and Darrell Gaskin of Johns Hopkins University.