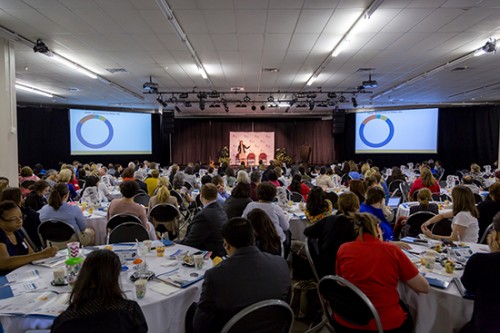 SAN ANTONIO – Historical and current policies have created and maintained unequal opportunities and large disparities in child poverty across race, ethnicity and gender, according to State of Texas Children 2016: Race and Equity in San Antonio, a new report released by the Center for Public Policy Priorities (CPPP). For example, because people of color were historically denied access to high-opportunity neighborhoods, certain families consequently experienced poor living conditions, fewer services, and less economic mobility. Although no longer in legal practice, similar policies have had cumulative effects in the economic and educational benefits and disadvantages that can be passed on from generation to generation.

These policies and practices may be from San Antonio's past, but they still have a profound effect on the present. Notably, almost 130,000 children in Bexar County live in poverty. Of those children, 103,000 are Latino, 11,000 are Black, 13,000 are White and 1,000 are Asian. But the proportion of children affected by poverty within each group tells a different story. In Bexar County, poverty rates for Latino (32 percent) and Black children (32 percent) are nearly three times higher than they are for White or Asian children. Today, nearly one of every three Hispanic and Black children in Bexar County lives in poverty.

"This is unacceptable," said San Antonio Mayor Ivy R. Taylor, who spoke at the report release event today in front of over 300 community members. "We have to do better and be better for our children, our communities and our entire city. My goal is to connect every San Antonian, no matter their age, gender or ethnicity, to opportunities for prosperity. One way we are hoping to fill the gaps is through the My Brother's Keeper initiative, which focuses on improving the life outcomes of our young men of color. From educating our smallest citizens, to providing job training for adults, to caring for our aging seniors, we must work together to ensure that every citizen becomes a resource and not a responsibility."

According to the report, with more than half a million kids living in the San Antonio metro area, the future of children in San Antonio will help determine the future of Texas. Additionally, by 2050, the Texas child population is projected to look very much like San Antonio today. Finding creative solutions to closing the educational, health and financial gaps between San Antonio kids from different backgrounds will require intentionally breaking down any obstacles to certain groups of children reaching their full potential and can be a model for the rest of the state.

Key findings include:
• White children in Bexar County are more likely to live in low-poverty areas while the majority of Latino children tend to live in moderate-to-high-poverty areas. High-poverty areas tend to have fewer public and private resources, which means Latino children are more likely than White children to experience segregated and under-resourced schools, unequal opportunity for job-training programs, and more.
• Nearly one of every four women (90,000+) in Bexar County between the ages of 15 and 44 lacks health insurance. The likelihood of being uninsured as a woman of childbearing age differs based on race and ethnicity, with Hispanic women being nearly three times as likely and Black women twice as likely, to be uninsured. Lack of coverage is related to delayed or inconsistent care should a woman become pregnant.
• An estimated 25.6 percent of children (or 120,470 children) in Bexar County are food-insecure, meaning they lack consistent access to enough food for a healthy diet. Hungry children have a harder time focusing in school and are more likely to have social and behavioral problems.

Key policy recommendations:
• Collect more data that is broken down by race and ethnicity.
• Create partnerships between schools, workforce development programs and businesses to promote pathways out of poverty and better support for families.
• Increase access to affordable health insurance for underserved families and women of reproductive age.
• Expand access to school-based child nutrition programs, such as afterschool meals, summer nutrition and school breakfast.

"As one of the fastest-growing areas in the country, the future of the San Antonio area and our state depend on the health, education and financial security of all our children—across gender, neighborhood, income, race and ethnicity," said CPPP Executive Director Ann Beeson. "Looking deep into the data, we found that too many children in San Antonio today continue to face tremendous barriers to opportunity because of the color of their skin."

The State of San Antonio Children 2016 report is part of the State of Texas Children 2016 statewide report. Both reports are part of the Kids Count project, a national and state-by-state effort to track the status of children in the U.S. funded by the Annie E. Casey Foundation. Check out the Kids Count Data Center for extensive child well-being data for each of Texas' 254 counties and seven largest metropolitan areas. Visit datacenter.kidscount.org.

This research was funded by Methodist Healthcare Ministries of South Texas, Inc. and the Annie E. Casey Foundation.